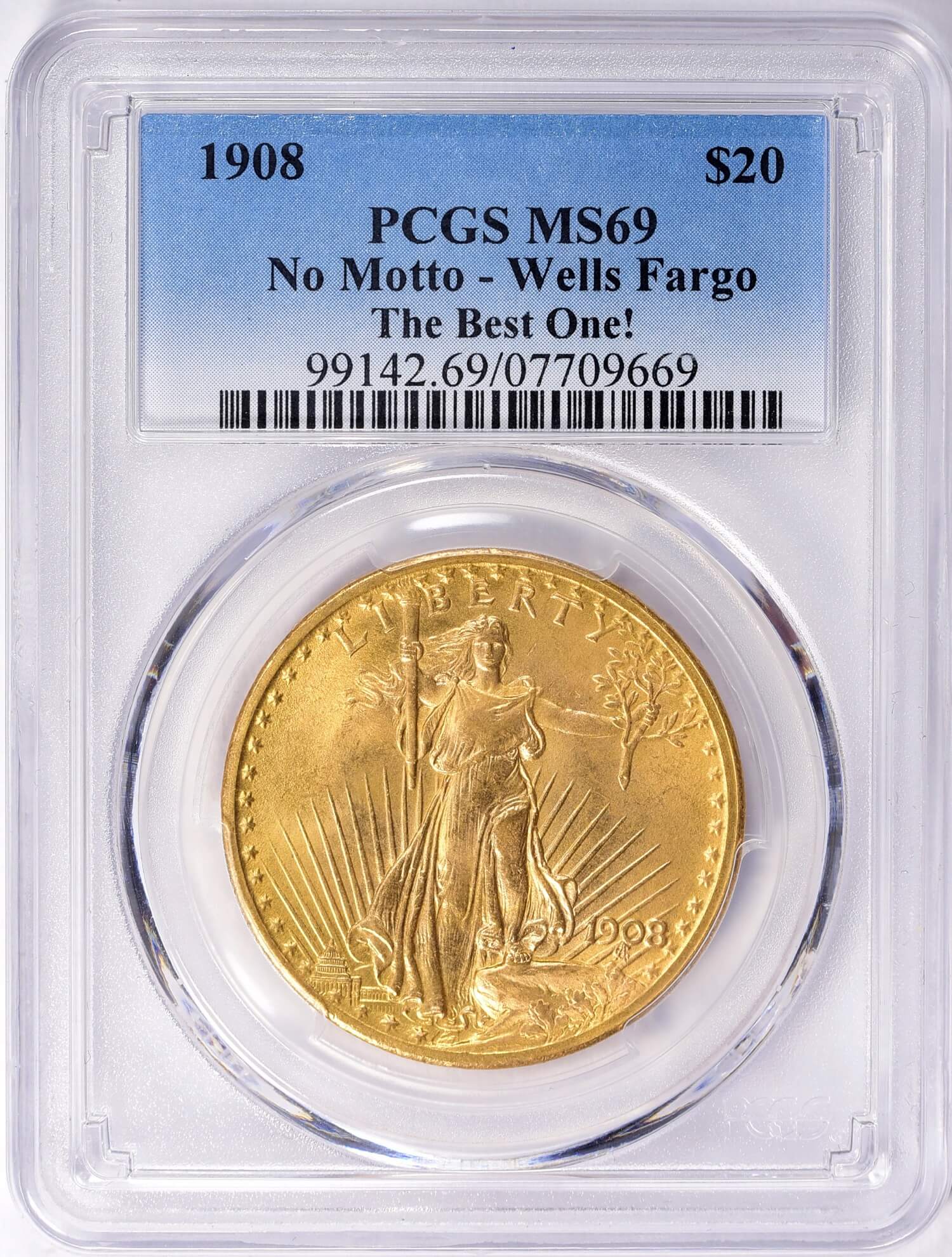 How It Came Into Existence

Theodore Roosevelt sought famed sculptor and designer, Augustus Saint Gaudens, to redesign the gold double eagle coins to represent America’s liberty and beauty. When the new design was revealed, it was lauded as “the most beautiful American coin ever designed”. The “No Motto” coins were soon required by legislation to be “With Motto”, but there were already thousands of No Mottos in circulation.

The Wells Fargo Hoard then went into deep storage, uncirculated, for decades and even slipped past the gold surrender in 1933. In 1996, a numismatist by the name of Ron Gillio met with a group of people to uncover the largest, most intact hoard of numismatics ever found. 19,900 No Motto Double Eagle Saint-Gaudens sat for decades in pristine condition and were then sent off to be graded by the Professional Coin Grading Service (PCGS). While none have achieved the highest grade, Mint State 70, ten were deemed MS69, the second-highest grade; three of the ten were closely investigated and only one received the classification of “The Best One”.

The 1908No Motto Double Eagle PCGS MS69 Wells Fargo Hoard “The Best One” how resides here in West Palm Beach as one of the rarest and sought-after numismatic to date.

Many coins from the 19,900 Wells Fargo Hoard were labeled between Mint State 65-68 but only10 coins were graded PCGS MS69. MS69 being the second-highest grade indicates its near exceptional level as having no visible marks, unless using an eye loupe or magnifier. “The Best One” is labeled as such because out of 10, only one was seen as the finest specimen.

The obverse portrays Lady Liberty with a raised torch & holding an olive branch, the 1908 date of mint, and 46 stars (only 46 states as of 1908). The reverse shows an eagle flying above the sun’s rays with the United States & the amount of the coin.

The edge of the 1908 No Motto Double Eagle has an inscribed motto - E PLURIBUS UNUM ("out of many, one" – out of the many original thirteen colonies, one nation emerged, the United States of America) with raised stars separating each letter.

Looking for the Best Place to Buy Gold in West Palm Beach?

At Endeavor Metals Group, we guarantee you that all our coins are authentic, and we have a variety of pre-1933 coins/collections to choose from. If you still don’t have the 1908 No Motto Double Eagle, see us today!